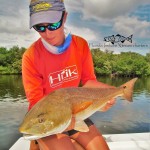 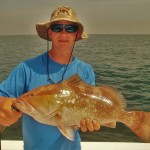 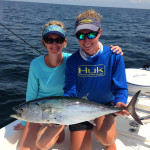 Fall is my favorite time of year when it comes to fishing season. Rivaled only by tarpon season or spring time… ah the heck with it… I love fishing all year round here in SW Florida. These past few weeks have been amazing as far as the fishing goes. Something else can be said for the weather for sure! The early morning and later part of the afternoon topwater action has been unreal. I’ve been throwing Heddon’s spook jr and the 4.5” spook XT’s and I’ll tell ya they are by far the toughest topwater baits you’ll have the pleasure of throwing. If fishing top water hasn’t been on your fishing, well I’ll tell ya you are missing out my friend. The past few days have been absolutely ridiculous as far as the topwater action is concerned. When we have conditions like this darker water the fish have more difficulty visually finding food. Therefore they rely more heavily on feel and sound. That’s where the noisy splashing and rattling baits are king of my bait choice. Getting out for that early morning bite is awesome! If you’re lucky enough to happen upon one of the big schools of redfish that are plowing through our waterways…  oh boy!! If you’re watching and know what you’re looking at… well they are kind of unmistakable when you happen upon a school of reds. Now for this kind of fishing … placement is everything… what I like to do is have a number of rods at the ready…. One or two with live or cut bait that I have some range with and one with topwater. They move pretty quickly so try to anticipate the direction they are headed. I like to pitch that heavy cut or live bait out first and let it soak to give me a little time to get a few lines out as the school approaches that bait. Once you hook one it will spook the rest of the herd…. So that’s why timing is the key if you wanna have multiple fish hook up.

Gag and red grouper on the near shore reefs are still around but dirty water can hamper them. You might need to push out or look for cleaner water to hook up with keeper size fish.  Something that’s been working quite well for me lately as I’ve been checking new areas is using a 3-6 oz brightly colored pink and white Bomber cobia jigs. I’ll cut a small 3-4 inch triangle of cut bait (cigar minnow or squid), drop it down and drift over the area you’ve marked as a potential hot spot. Something else you may want look for on your machine is not only that “live bottom” but the bait and other smaller fish as well. Another thing I’ve had to do is alter the gain on my sounder. There have been so many jellyfish and thermocline layers around I’ve been picking them up as smaller bait schools. So turn that auto setting off and manually set it to filter out those jellies…. especially if you have an older machine. But, the bite is hot out there and if you’re thinking of splashing the dive gear…. 12-14 miles is where you’ll find the color change and cleaner water.

If you’re looking for some fast paced action… well you’re gonna enjoy the bite that’s happening right now. First, head out offshore a few miles and look for the schools of bait that are just outside and easily accessible. Don’t worry, you’ll know where they are because the birds are looking for them as well.  I’ve been throwing small spoons, stick baits and silver minnow’s and just about anything that has a hook on it around those pods and all kinds of things are crushing in those schools…. bonito, spanish mackerel, kings, sharks everything. You can’t miss them…just look for the birds and all the fish crashing bait.

That’s gonna do it for now. So put out the gone fishin’ sign, stock up on tackle, load up that livewell and head on out to your favorite fishing hole… or better yet get out and find some new ones and catch’em up. Just remember to leave a few to make replacements for tomorrow. 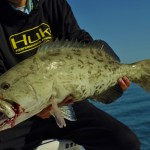 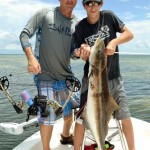 Hello SW Florida! It’s another fine day in our little slice of fishing paradise capital of the world. So is it hot enough for ya out there yet? Boy, August can be brutal which brings me to a little reminder for you. Late summer fishing can be hot as the weather at times but make sure to keep plenty of drinking water on the boat. Folks often underestimate how fast you can get dehydrated out there.

As far as our angling goes… the offshore grouper bite has been awesome for red grouper as well as gags. You may have to push out a bit further to find some cleaner water but well worth the extra fuel you might burn. On the other hand, mangrove snapper remain on the prowl and are very abundant on most of our locally published reefs.  Snapper have very keen eyesight so if you are after these tasty adversaries you’ll need to downsize not only hook size but your line as well. Which, sadly to say…has a very small margin for error. Like I always say, it’s a balance between getting bit or getting broke. I run a larger 8 foot Penn 6500 Spinfisher V for my spinning outfit and spooled with 15-40 lb braid and for my conventional set I have Penn Fathom 40 spooled with 50 lb mono. For the snapper I use a light wire 2/0 or 3/0 circle hook and a minimum 3 ft of 20-25 lb fluorocarbon leader. Now here’s where a lot of tactics will differ with bottom rigs and I could go on for a while with them. But I think for all around simplicity the old school bottom style rig is the best all-around rig.  But they basically all have the same common denominator. Keep the bait at a good distance from the sinker or weight. Snapper are a bit cunning and will rob you blind if you’re not playing an active role. The best way to catch these guys are to anchor on your favorite reef or “secret spot” and chum away to get them fired up. Then free line a 1-2 inch chunk of cigar minnow or threadfin down in that chum slick. Lots of factors are involved with getting this technique dialed in but once you do… its money!

For the inshore side of the house… My favorite right now is topwater. Artificial baits are easy to use and are reliable bait. I like the Heddon spook One knocker in the bone color. These topwater baits make for some explosive action to say the least. A few nights ago I had a snook come 2 feet out of the water when he struck that one knocker spook. That makes one show the pearly whites. Now one thing you gotta keep in mind is when you get one to bust that spook you’ve gotta resist the urge to do what I call “The Bill Dance Boo-yah maneuver “ aka setting the hook as hard as possible. Here’s why… first it’s a safety thing. You get crushed and you get all excited and as soon as that water boils behind that lure you snatch as hard as you can and all 6 of those hooks are approaching the boat at a very high rate of speed. Yikes! Also, take a look at the clarity of the water lately…not the clearest inside at the moment. When that fish is chasing the lure and you execute the B.D.B.M. that fish is sitting there with his bib on and empty dinner plate wondering where the heck my food just went.  Point being, don’t jerk that bait away before you feel the weight of the fish. I’ve had redfish swat at my lure 5 or 6 times before they finally got a good bite on it. Trout are very similar and will follow a topwater for 10 or 15 yards before they get it. Snook on the other hand… they rarely miss. Now we all know that there are times when it’s just too darn hot to sit and fish… try picking up a fishing bow set up. I’ve had folks on board that say that’s just as fun as the fishing trip. And just maybe you’ll get as luck as my clients did last week and have a big cobia swim out in front of the boat!!